Skip to content
by Kerstin Sherie xxPosted onSeptember 26, 2015December 31, 2015
It was an experience I truly won’t forget. I think I wasn’t expecting to be so emotional but it was. While our stay in the Philippines, my mum suggested that we do charity work such as feed the homeless or the children who were less fortunate than the other kids. My mum has been working with a charity Program called PAIVA for a few years now and I never really understood what kind of

work they were doing until now.   We committed ourselves to do a feeding program with another charity group my mum collaborates with called CAARO (Philippine based charity group)

My sister, dad and I chose a local school in Lingayen, Pangasinan- a province that’s around 3-4 hour drive from Manila. It was a province that both my parents were born in, so it was pretty special giving back to the community. My mum wasn’t able to join us on this trip as she is currently attending a wedding in the States.
As we got ready that morning, I was really excited to meet all the little kids and see what the schools lo 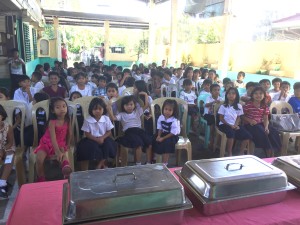 oked like. My mum has so many stories she shared with us about school and I just wanted to see if it was like I pictured. As we entered the school, we had innocent eyes just gazing at us in their mismatched uniform. When the teachers announced that we were the visitors they were expecting, they had their big smiles on their faces and they looked so excited. I also noticed that there was a cute sign at the front of what looked like a basketball court they used as an assembly saying “welcome Danny, Kerziah & Kerstin from Sydney”. it was so sweet!
After we distributed the food to the kids- they were all so polite when receiving the food, we chatted to a few of them! well tried to anyway! it was so cute, I had a little translator translating my english to their local dialect and we were all just giggling at the communication barrier.  They danced for us and they sang for us. The song wasn’t in english except for the words “Thank you” and that’s when i got so emotional again! These kids don’t have much, but they make use of what they have. Visiting the school made me realise so many things. It made me appreciate the things
we have and seriously not to take it for granted.
Everyone says that “you shouldn’t take anything for granted” but seeing these kids made me realise and appreciate what we have EVEN MORE. We should be thankful that we have a bed to sleep in at night, we have fresh clothes to wear every day, we have a CHOICE of what to eat and when we want to eat. Some of these kids don’t even get to eat lunch every single day, it depends on if they could afford it or not. 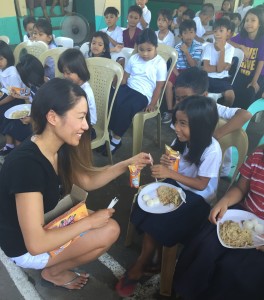 When you’re having a bad day, just think of what you have around you and be thankful for that. There are other people out there in a worse position than you but yet they don’t complain, they just are thankful for w
at they have too. I think this is definitely the beginning of more charity work. I would definitely love to come back with my family and do it again with them. Definitely helped me put things into perspective again.

PLAN YOUR NEXT TRIP